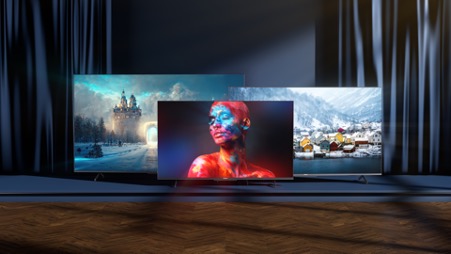 In an attempt to debut its QLED display technology , the Singapore-based is rolling out a refresh for its all-new PRISM+ Q-Series Ultra, alongside a slew of other features such as HDR10+ and Filmmaker Mode.

Coming in three premium models – the Q55 Ultra, Q65 Ultra, and Q75 Ultra, the TV will retain most of the popular features such as Hands-Free Voice Control, Dolby Vision® HDR, and Dolby Atmos® immersive audio.

Thanks to the power of quantum dots – microscopic molecules that enhance light and colour, the TVs improved colour vibrancy, brightness, and contrast. Complimenting the hardware are features such as Dolby Vision® HDR and Dolby Atmos®, with the Ultra receiving HDR10+, allowing colour and brightness levels to be set frame-by-frame to enhance brightness levels and better contrast.

The Ultra lineup will also feature the Filmmaker mode, allowing devices to detect and support the content’s original format. Retaining the brand’s largest TV display, the Q86-QE PRO exists as a lite version of its Ultra sibling – omitting the QLED display.

Understanding the heavy local consumption of Hollywood blockbusters, Korean and Chinese content, PRISM+’s key partnerships with meWATCH and Viu allows users to take advantage of the superior viewing experience with up to 12 months of free trials.

A part of the Google ecosystem, the TVs now come with built-in Google Assistant to look up movies, stream apps, play music, as well as control their TV and connected smart home devices. In addition, the built-in Chromecast will allow for users to cast from their devices directly to the TV, allowing their devices to communicate seamlessly and without hassle

The PRISM+ Google TVs are currently available for purchase on the PRISM+ online store, physical retail stores and all authorised online retailers.

If you have nearly missed the previous 11.11 shopping festival, the ongoing Amazon Black Friday carnival is your chance to make up for what you missed. With PRISM+ being one of the major local vendors participating in this event, shoppers can come to expect amazing deals for their latest home appliances. Utilising polished surfaces and woven fabric, the Devialet Miana is the company’s first attempt at a luxurious-looking portable smart speaker. It utilises voice assistant and connects over Wifi, Bluetooth 5.0, Airplay...