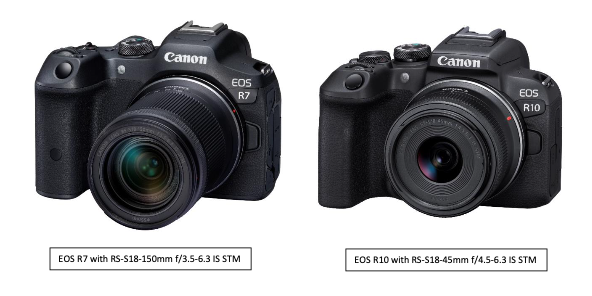 The Canon EOS R7 and R10 are designed for two main demographics – the former more inclined towards capturing dynamic subjects while the latter is suited for everyday users. To take advantage of the superior camera sensor and mobility advantage, the company has also released two lenses – the RF-S18-45mm f/4.5-6.3 IS STM and RF-S18-150mm f/3.5-6.3 IS STM.

The compact size and lower starting price and portable form factor are mainly attributed to the APS-C image sensor found on the cameras, which is 40% smaller and up to 24% lighter. The EOS R10 comes with a built-in flash starring a 24.2 MP sensor. Meanwhile, the EOS R7 comes with a 32.5 MP sensor alongside In-Body Image Stabilization (In-Body IS), weather-sealing, and dual SD card slots.

Adopting deep learning-based subject detection capabilities of the EOS iTR AF X system, the cameras can track subjects precisely across the entire image area, regardless of the AF area mode.

This technology was first found on the EOS R3 and provides highly responsive and reliable autofocusing, even in scenes with intense movements.

Capable of up to 15 fps high-speed continuous shooting in mechanical and electronic first-curtain shutter modes, the EOS R7 and R10 present the fastest speed amongst the EOS R series alongside APS-C EOS cameras at the time of this writing.

When using the electronic shutter mode, the EOS R7 is capable of continuously shooting at 30 FPS at max megapixels whilst the R10 shoots at 23 FPS at its highest megapixels. The burst mode found on these devices shoots full-resolution RAW images at up to 30FPS, with pre-shooting that starts up to 0.5 seconds before releasing the shutter.

Combining the DIGIC X image processing engine with the respective APS-C CMOS image sensors, the cameras can achieve superior image quality and visual representation beyond what is assumed of the megapixel count.

Coming with Movie Digital Image Stabiliser (IS) as standard, both cameras conduct 5-axis image stabilisation – even when this feature is absent on the lens. The EOS R7 takes it a step further with up to 8 stops’ equivalent image stabilisation during videos and still image shooting.

One of the highlights of every benchmark, both devices are capable of 4K HDR PQ video recording. Additionally, the EOS R7 and R10 use 7K oversampling to record high-quality 4K UHD video (30p) in the new 4K UHD Fine mode. Even in the standard mode, the camera is capable of uncropped 4K 60p recording.

Thanks to the APS-C sensor, the camera is capable of superior telephoto effects for wildlife photography – as though it comes with a built-in extender to extend focal lengths. The field of view is automatically magnified by about 1.6 times the lens focal length. On the higher-end EOS R7, the said feature can be combined with the 4K UHD crop mode for a telephoto effect of around 1.8 times.

The new camera includes a new Panorama Shot SCN mode and an improved Panning SCN mode with better image stabilisation for easier panning shots. A new in-camera Depth Compositing mode automatically merges focus bracketed images into an image that is well focused from front to back. An auto white balance algorithm will correct the white balance of shots with deep learning technology.

The EOS R7 also features a new auto-level function to correct tilted images in still images and video, saving users the time and effort required to ensure a camera is levelled.

The table below illustrates the pricing and availability information of the various cameras along with their accessories.